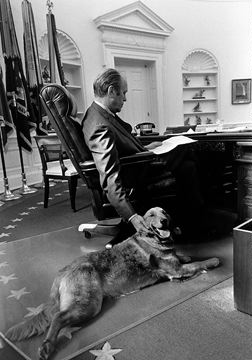 President Gerald Ford died at his California home on December 26, 2006. He was 93 years old.

Since the passing of President Ford, citizens, organizations, and institutions have bestowed honors and tributes upon the former President, reflecting their gratitude and appreciation for his service to the country as a sailor, congressman, Vice President, and Thirty-Eighth President of the United States.

Eulogies Given at the Funeral Services for President Ford

Gravesite at the Ford Museum in Grand Rapids