Soon after President Ford acquired his golden retriever in October 1974 (see "How the Fords Got Liberty"), the White House staff began receiving letters addressed to Liberty or asking questions about her. The President's daughter Susan agreed to respond to letters asking about either Liberty or her cat Shan. Dorothy Downton, who served as Personal Secretary to President Ford, eventually began producing photographs "autographed" by Liberty as in the example below:

"This photograph was used for special friends of the Ford family who requested an autographed photograph of Liberty.  Every so often I would have about ten to twelve photographs sent to my office where I would then arrange for Liberty to be brought to my office and we would do her autograph. The photographs would be attached to a hard cardboard backing and sometimes would be addressed using calligraphy to the individual or individuals requesting the photograph.  When Liberty arrived in my office, I would clean her paw very carefully and then press her clean paw on an inked stamp pad and then press the inked paw on the cardboard backing.  I would then proceed with the rest of the photographs I had received.  I probably would not have done more than ten or twelve at any one time.  When we had autographed all the photographs for that period, I would then again clean Liberty's paw quite thoroughly so she would not leave a trail of ink on the carpets.  Liberty, who was a most gorgeous golden retriever, was always very gentle and patient while I did her autographs.  She was a delight to work with and a pleasure to have around. She was also extremely friendly."

As news reports of these "paw-tographs" surfaced, many individuals wrote to the White House asking for them. Eventually the White House staff made a copy of Liberty's pawprint, turned it into a rubber stamp, and began stamping her "autograph" onto photographs. The images below show the form letter used to answer these requests along with one of the stamped paw-tographed photographs. 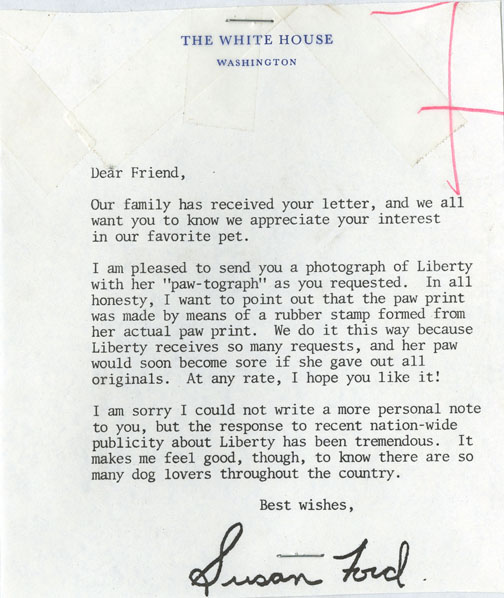 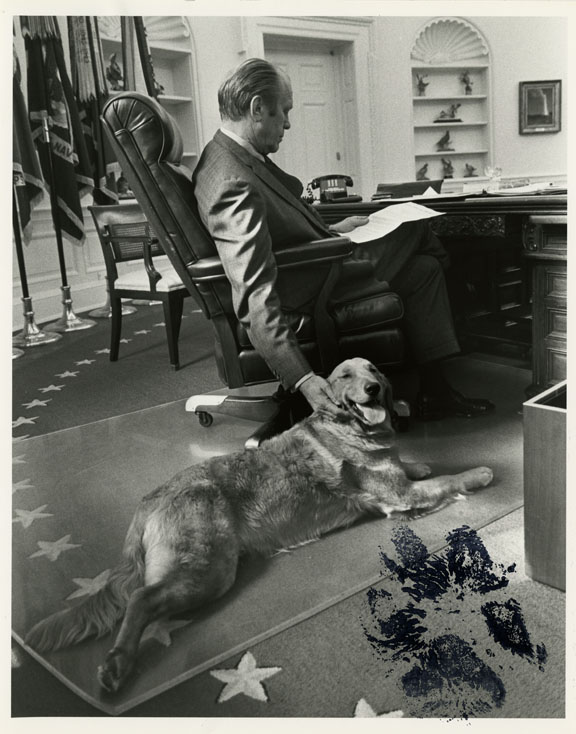