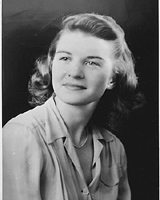 Elizabeth Anne (Betty) Bloomer was born in Chicago on April 8, 1918 and raised in Grand Rapids, Michigan. She is the third child and only daughter of Hortense Neahr and William Stephenson Bloomer. Mr. Bloomer, a factory parts salesman, passed away in 1934, when Betty was sixteen years old. Mrs. Bloomer, remembered by her daughter as “strong and kind and principled", survived him until 1948.

At an early age, Betty Bloomer developed a passion for dance. Upon graduation from Central High School in 1936, she attended the Bennington School of Dance, in Vermont, for two summers. While studying there she met and began her long association with choreographer Martha Graham. She continued her studies with Ms. Graham in New York City, becoming a member of her Auxiliary Performance Troupe and performing at Carnegie Hall.

Close family ties took Betty Bloomer back to Grand Rapids in 1941. She became fashion coordinator for Herpolsheimer’s, a locally prominent department store, and continued her interest in dance, forming her own performance group. She also worked with handicapped children, helping them experience the joy of rhythm and movement in dance. In 1942 she married salesman William Warren. The union did not last, and they divorced amicably several years later. 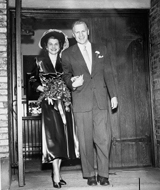 Gerald and Betty Ford on their wedding day, October 15, 1948

In 1947 a friend introduced her to Gerald R. Ford, Jr., a young lawyer who had served as Navy lieutenant during World War II. By February 1948 the couple was engaged to be married. Their wedding took place on October 15, 1948, two weeks before Mr. Ford was elected to his first term in Congress. They moved to Washington, D.C. where he served as member of the House of Representatives for 25 years.

Mrs. Ford quickly assumed the tasks of a congressional spouse of the era, spending much of her time in volunteer work with the Congressional Wives Club, the 81st Congress Club, and the National Federation of Republican Women. She also provided tours of the Capitol to visiting constituents from Michigan.

While in Congress, the Fords lived in Alexandria, Virginia. There, in addition to her congressional spouse activities, Mrs. Ford supervised the home, did the cooking, undertook volunteer work, and taught Sunday school at Emmanual-on-the-Hill Episcopal Church. She was active in PTA and devoted much time to supporting her children’s pursuits in scouting, baseball, football, and the many other activities of a young growing family.

The Ford Family in Oval Office prior to swearing-in of Gerald Ford as President, 1974

By 1973 the Fords were planning retirement from Congress when a turn of political events shook the nation and reshaped their own future. After the 1972 break-in of Democratic Headquarters in the Watergate Hotel, the Nixon administration gradually became mired in an unfolding scandal and consumed by legal investigations. Then, when Vice President Spiro Agnew resigned amidst a scandal of his own, President Nixon nominated Congressman Ford to replace Agnew. After President Nixon himself resigned on August 9, 1974, Gerald Ford took the oath of office as 38th President of the United States. Instead of retiring, the Fords moved to the White House.

As the new first lady, Betty Ford immediately revealed the openness and good-natured candor that became her trademark. She held her first press conference on September 4, 1974. Expressing herself with humor and forthrightness on controversial issues of the day, she answered questions about women in politics, abortion rights, and a proposed Equal Rights Amendment to the Constitution. When she was diagnosed with breast cancer later that month, she broke with social conventions by fostering public discussion of her diagnosis and treatment. In doing this, she purposefully raised public awareness of screening and treatment options and reassured the many women already suffering from similar ordeals. As soon as possible, she resumed her public duties at the Executive Mansion.

During her tenure as first lady, Betty Ford addressed public issues that were important to her. She was an outspoken advocate of women’s rights and aspirations in an era when there was much debate on the matter, encouraged the appointment of more women to senior government posts, supported the U.N. International Women’s Year in 1975, and supported passage of the Equal Rights Amendment. On the CBS show 60 Minutes, Mrs. Ford candidly shared her opinions on such provocative issues as abortion rights, pre-marital sex, and marijuana use. Her statements drew the ire of many conservatives at a time when former California governor Ronald Reagan was already challenging her husband for the Republican Party’s presidential nomination in 1976. At the White House, public opinion initially ran two to one in criticism of her remarks, but within months her public approval rating had climbed to 75%.

She continued to promote programs for handicapped children and brought public attention to the importance of the performing arts. While in the White House, Mrs. Ford encouraged her husband’s decision to present the Presidential Medal of Freedom to her mentor Martha Graham, the first dancer so honored.

Mrs. Ford did not shirk the extensive social duties of a first lady, as she and her husband hosted numerous State dinners and other events, bringing an informality and warmth that guests and the nation welcomed. In 1975 she accompanied the president in journeys to fourteen countries, from China to the Vatican.

Betty Ford was an enthusiastic supporter of her husband during the 1976 presidential election campaign. She made several speaking tours throughout the east and mid-west. Her popularity was reflected on lapel buttons that proclaimed "Betty’s Husband For President!". When Gerald Ford was defeated by former Georgia governor Jimmy Carter, the couple left Washington and moved to Rancho Mirage, California.

In 1978 her prescription drug and alcohol use led to a family intervention and her self-admittance to Long Beach Naval Hospital for treatment.

In facing her personal problems, Betty Ford again dealt openly and honestly with the public. Her 1978 autobiography, The Times of My Life, chronicled her life through the White House years and concluded with a candid, unplanned chapter on her admittance to Long Beach. Her second book, Betty: A Glad Awakening, published in 1987, recounted her experience of recovery from chemical dependency. She became an active and outspoken champion of improved awareness, education, and treatment for alcohol and other drug dependencies.

In 1982 her good friend, Ambassador Leonard Firestone, joined Mrs. Ford in co-founding the non-profit Betty Ford Center at the Eisenhower Medical Center in Rancho Mirage, California. Mrs. Ford worked tirelessly to raise funds and to help research and design treatments to assist men, women, and families in recovery from alcoholism and other drug dependency. Today, The Betty Ford Center is regarded as one of the most outstanding treatment facilities in the world.

Mrs. Ford has been the recipient of many honors and awards. In 1991 she was presented with the Presidential Medal of Freedom by President George H. W. Bush for providing "selfless, strong, and refreshing leadership on a number of issues." In 1999 President and Mrs. Ford were awarded the Congressional Gold Medal for "dedicated public service and outstanding humanitarian contributions."

After her husband's death on December 26, 2006, Mrs. Ford led her family and the nation with grace and strength through several days of national memorial observances. She died on July 8, 2011 at the Eisenhower Medical Center in Rancho Mirage, California. After ceremonies in California and Grand Rapids, she was interred beside her husband on the grounds of the Gerald R. Ford Presidential Museum in Grand Rapids.

List of Awards and Honors Given to Betty Ford

Betty Ford in the U.S. Census