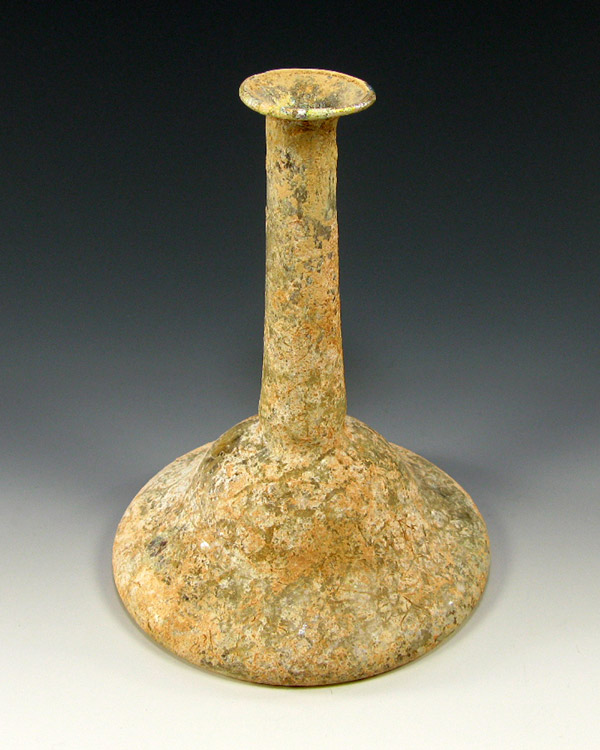 The Roman Vase is made of hand-blown glass, and painted brown. The base is convex, with an elongated circular neck and concave top. From the vase’s shape, the piece appears to have been used as a perfume or oil decanter in ancient times. The vase was found in the Levant (eastern Mediterranean), and dates back to the 1st-2nd century A.D.

The United States continued to promote the peace process between Israel and Egypt during Ford’s Presidency. There had been a long struggle between Israel and the surrounding Arabic countries since the modern Jewish nation was founded in 1948. The United States was the first country to recognize Israel and served as an ally of this fellow democracy. Because of the United States support of Israel, the Organization of the Petroleum Exporting Countries (OPEC) imposed an embargo on America in 1973. As a consequence, the price of oil increased 400%.

Because of the support the United States had long provided Israel, President Ford believed that Israel should be more willing to negotiate with Egypt, an adversary in recent wars. To aid in the effort of peace, Ford sent Secretary of State Henry Kinssinger to the region. His many flights to many countries earned his negotiations the sobriquet “shuttle diplomacy.”

President Ford was stung by accusations of anti-Semitism because he was willing to reassess the nation’s policies toward Israel. In reply, Ford told Jewish groups, “It is because of my affection and admiration for the Jewish people and the state of Israel that I’m so concerned about the lack of progress toward peace in that part of the world. We must have progress soon if we are to avoid another war, the fifth in thirty years.”

In 1975, after exhaustive work by Kissinger, Israel and Egypt signed an agreement on troop disengagement in the Sinai Peninsula. The Roman Vase is one of many head of state gifts exchanged during this time of peace negotiations between the United States, Israel and Egypt.