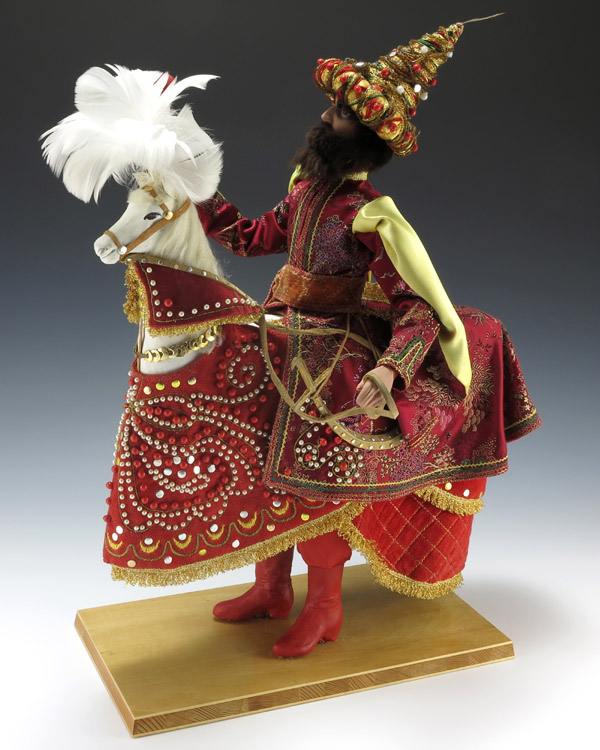 This Cossack doll, which stands approximately 22 inches high, was a gift of his Excellency Edward Gierek, first secretary of the Polish United Workers Party in Warsaw, Poland. Given to President Ford while visiting Poland in 1975, the doll depicts a Cossack in full decorative dress on horseback.

The Cossacks were a group of people who fled to the Dnieper River region in the fifteenth century in order to escape serfdom in Poland and the Ukraine. They called themselves Cossacks, which means “free people,” and lived a simple life on communes in the steppes. Because they were seeking to break away from serfdom, the Cossacks were often required to fight to maintain their independence. Consequently, they became skilled fighters and horsemen for their military group known as the Zaporozhskaya Sech, which did not disband until 1775. They passed this military training on to their male children, who were reportedly capable of riding horses by the age of three. It has also been recorded that a weapon was placed in the hand of male infants after birth, to signify their future role as warriors.

Historians identify three military periods in Cossack history. The first lasted from 1550-1648, and consisted of wars against the Tartars and the Turks who wanted to bring the Cossacks back under their control. In the second phase, which lasted from 1648-1775, the Cossacks fought against the cultural and economic domination of the Ukrainians and the Poles, specifically the Polish aristocracy. Because of their efforts against the upper class, the Cossacks gained a reputation as the heroes of the lower classes in Poland. The final military period lasted from 1775-1917, and involved struggles to create and maintain an autonomous Ukrainian state. Communities of Cossacks still exist in Poland and the Ukraine, and their reputation of equestrian skills continues.

The Cossack doll was given to President Ford in 1975 after a period of renewed and improving relations between the United States and Poland. President Nixon had met with Gierek in 1972 and 1974. It was at these meetings that the first serious talks on cooperation in scientific research between the two nations occurred. The talks focused primarily on industrial trade, specifically relating to coal production, and six U.S.-funded projects relating to coal were arranged for the U.S. Department of the Interior. Before this period, the main trade between the U.S. and Poland was agricultural. After these visits there was a shift in trade toward industry, the purchase of heavy lathes used by the National Forge Company in Erie, Ohio serves as a prime example. Gierek’s visit and meeting with President Ford in 1976 ushered in a new era of cooperation and trade between the US and Poland, despite the continuance of the Cold War.