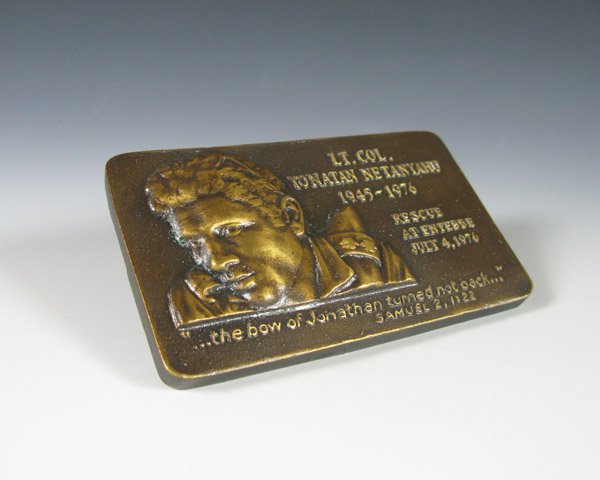 In June 1977 President Gerald Ford received the Yonatan Netanyahu Memorial Award from the American Friends of the University of Jerusalem. The award, in the form of a bronze plaque, includes a relief picture of Lt. Col. Yonatan Netanyahu, an Israeli who played a major role in the rescue of Jewish hostages in Entebbe, Uganda on July 4, 1976.

On June 27, 1976 Air France flight 139 from Tel Aviv, Israel was hijacked by two Arabs and two Germans from the Revolutionary Cell when it stopped in Athens. The hijackers took the plane to Entebbe, Uganda where they held the passengers for a week, trying to negotiate with the government of Israel for the release of several Arab prisoners. During that time, the Arab and German terrorists, with the help of Ugandan soldiers, separated the Israeli hostages from the rest of the passengers. The Israelis were interrogated by the terrorists for days.

Meanwhile, in Israel, the government searched for a way to end the crisis without negotiating with the terrorists, settling on a rescue mission to be performed by the military and led by Lt. Col. Yonatan Netanyahu, the older brother of the current Prime Minister of Israel, Benjamin Netanyahu. The mission involved flying four C-130 Hercules planes from Israel to Uganda and landing them quietly at the airport. On July 4, the hostages were successfully rescued and transported back to Israel, but not without a fire fight. Leading the Israeli soldiers through the airport, Netanyahu was shot and killed.

On the day when the United States celebrated the bicentennial of her independence, Israel celebrated the return to safety of some of her people because of the bravery of a few. President Ford recognized the significance of the event for the furthering of independence, saying, “Our own Bicentennial Independence Day was enhanced by an event that day at Entebbe Airport in Uganda. That action of liberation freed our own hearts to fuller understanding of the universal meaning of independence--and the courageous action sometimes required to preserve it.”

In June 1977, Ford became the first person to receive the now annually given Yonatan Netanyahu Memorial Award for his friendship to Israel and his work in the “advancement of human values.”