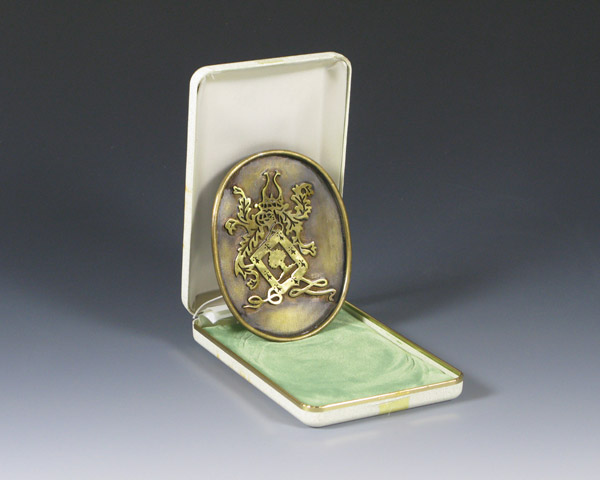 This commemorative medallion was a gift to President Gerald R. Ford from Councilman Merle D. Gilliland and T. Mel Anderson, President of St. Mary’s College of California. The oval-shaped, bronze disc is adorned with a crest in relief on the front and “Moraga Family Crest Presented to President Gerald R. Ford May 25, 1976 by Town of Moraga & St. Mary’s College, Moraga, California” inscribed on back. It measures 3.5” W x 4.5” L.

Spurred by the bombing of Pearl Harbor, Ford joined the U.S. Naval Reserves in early 1942. His academic credentials and coaching history allowed him to ascend the ranks quickly and spend time as a trainer. For one year, starting in May of 1942, Ford taught elementary seamanship, ordnance, gunnery, first aid, and military drill at Navy Preflight School in Chapel Hill, North Carolina.

He also coached all nine sports offered by the school. Ford then went on to serve on the light carrier U.S.S. Monterey (CVL-26) in the south Pacific during some of the most intense engagements of World War II.

The medallion reflects a little known chapter in Ford’s life. He left the U.S.S. Monterey just before Christmas in 1944 and was reassigned to the Navy Pre-Flight School, St. Mary's College, California. Lieutenant Ford served in the football division, where he taught cadets “aggressiveness, coordination, and alertness,” to help these future pilots become “tougher physically than all enemies.” Cadets participated in other instructional sports, coupled with academics, military drill, and gunnery lessons. From there, in April of 1945, the U.S. Navy assigned Ford to Naval Reserve Training Command in Glenview, Illinois, where he taught and coached until the end of his service in January of 1946.

Ford became an honorary alumnus of Saint Mary’s College in 1993. Mel Anderson, then President of Saint Mary’s, and Regent Gerry Fizpatrick traveled to Rancho Mirage, where they personally conferred the honorary title on former President Ford. Ford responded by saying that he had "wonderful memories of [his] service at Saint Mary’s."