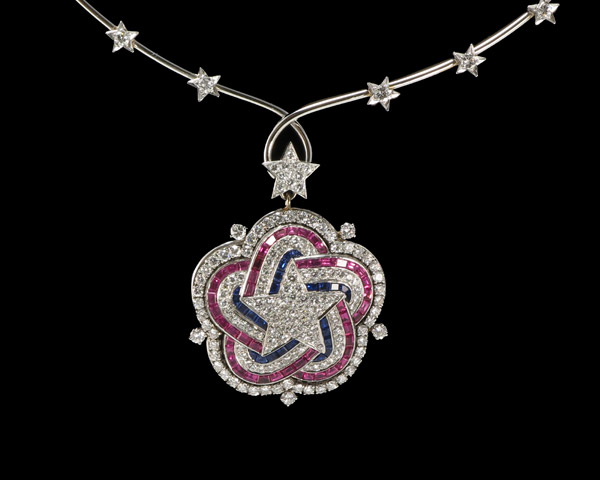 The Bicentennial Jewel is made of white gold, diamonds, rubies and sapphires and is in the shape of the official 1976 Bicentennial symbol. The neck support contains thirteen stars representing the thirteen original colonies. The pendant may be removed and worn as a pin.

Pierre Touraine was a world renowned jeweler before he made the Bicentennial Jewel in 1976. Born in Marseille, France, Touraine began working with gems early and created many pieces for European Royalty and aristocracy. He was selected to be one of the jewelers for the coronation of George VI of England. Some of his work was also displayed at the World’s Fair in New York in 1964. Other famous works that Touriane assisted with include The Black Star of Queensland; the worlds largest cut black sapphire, which weighs 733 carats. He also assisted with the four famous presidents in sapphire, which includes Washington, Jefferson, Lincoln and Eisenhower.

In 1938 Touraine immigrated to the United States, where he lived in New York City. In 1942 he was chosen to do the intricate gold sculpturing for an exhibition of Salvador Dali’s jewel collection. During World War II, Touraine moved to California and helped with the war effort by cutting tiny jewel bearings for instruments, as the German U-boats had made the importation of such jewels from Switzerland impossible. In 1960 Touraine moved to Scottsdale, Arizona for his wife’s health.

Although the Bicentennial Jewel was made in 1976, scheduling conflicts postponed the presentation to President Ford until January 10, 1977. Mr. and Mrs. Touraine, along with Congressman John Rhodes, spent more than two months attempting to get an appointment with President Ford. Rhodes had requested that the jewel be displayed in the White House; however this was not possible due to the President’s insistence that no Bicentennial gifts, regardless of value, be displayed at the White House. Since each gift was considered a gift to the nation, none were to be singled out as better than the others. The Jewel was displayed privately in the Oval Office for thirty days before being transferred to the National Archives until suitable display could be arranged in Michigan, where the Ford Museum would be established in 1981. The necklace has never been worn.

The Bicentennial Jewel remains a beautiful and valuable gift to the nation.