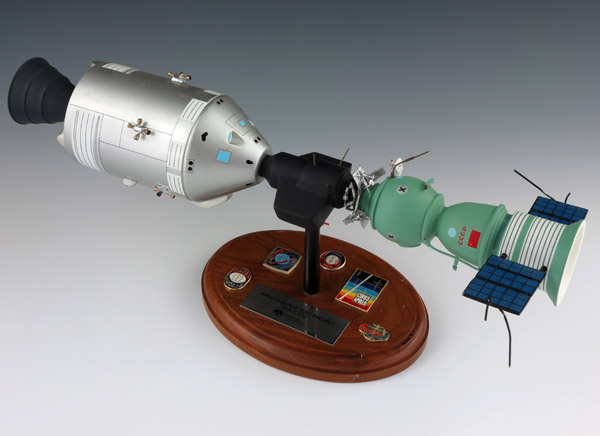 This scale model of Apollo-Soyuz was presented to President Gerald R. Ford by cosmonauts Aleskei Leonov and Valeri Kubasov in the Oval Office on September 7, 1974 – the day before Ford pardoned former President Richard Nixon. The 1/50 scale model measures 6.5” H x 17” W x 9” D. One of Ford’s staff affixed the Soviet pins commemorating Apollo-Soyuz to the base of the model.

In July of 1975 capsules from the world’s two largest competitors in the decades long space race met in what became known as the Apollo-Soyuz Test Project (ASTP). The historic docking of the two spacecraft brought a symbolic end to the 20-year space race. President Ford radioed to space, “It has taken us many years to open this door to useful cooperation in space between our two countries and I am confident that the day is not far off when space missions made possible by this first joint effort will be more or less commonplace.”

Gerald Ford played an active role in America’s space program. During his third congressional term he was appointed to the Appropriations Subcommittee on Defense Spending, which provided the funding for much of the early rocket programs. Ford also sat on the “Select Committee on Astronautics and Space Exploration,” chaired by Senator Lyndon Johnson, which recommended the change from the National Advisory Committee on Aeronautics (NACA) to the National Aeronautics and Space Administration (NASA). In 1958 Congressman Ford helped draft the Space Act that gave NASA its charter.

Ford’s 895 days in the White House saw the end of the Apollo Program and the beginning of the shuttle program. The Apollo-Soyuz mission fit Ford’s presidency well – a presidency geared towards healing and reconciliation - as a milestone in U.S.-Soviet relations. On October 13, 1975, Ford referred to the mission as a “great demonstration” in cooperation between the two countries and as a “forerunner of what we can do on an expanded basis, not only in space and science but in many other areas.”

The Apollo and Soyuz spacecraft both launched on July 15, 1975. They docked in outer space at 12:10 p.m. EDT on July 17. Although joint scientific and logistics experiments were conducted by the crews, the docking served more symbolic purposes. The crews of both spacecraft spent much of their time talking to President Ford and General Secretary Brezhnev via direct lines, exchanging gifts, and taking part in live press conferences. Cosmonauts Aleskei Leonov and Valeri Kubasov manned Soyuz 19, while astronauts Thomas Stafford, Vance Brand, and Donald Slayton flew Apollo.

The artifact collections at the Gerald R. Ford Presidential Museum also include a Presidential flag carried aboard the mission, several presentation plaques, and the telephone President Ford used to talk with the orbiting crew in 1975.