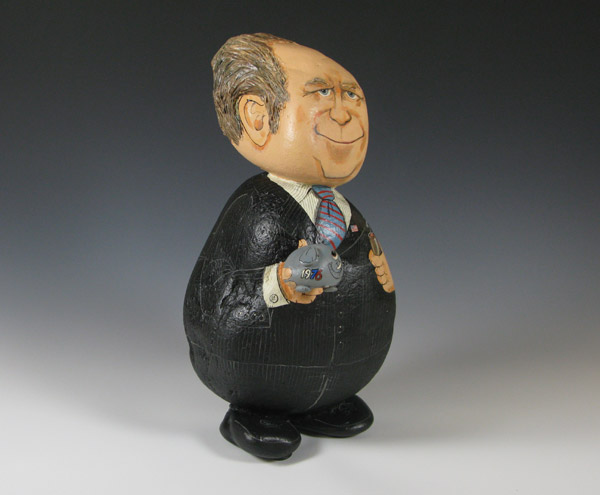 This Bicentennial caricature of Gerald Ford was presented to future Vice President and Ford’s Chief of Staff, Dick Cheney, while he was on a trip to Philadelphia in September 1976. The sculpture, created by artist Michael Manning, weighs approximately 70 pounds and is made of Pennsylvania river stone. The caricature depicts Ford in a striped business suit, striped shirt, and a red and blue-striped tie. An American Flag lapel pin adorns his jacket pocket. Ford’s caricature also holds a small stone elephant in one hand and a lighted pipe in the other, a common feature associated with Ford.

Though "Rock Jerry" is a carefree likeness of Gerald Ford, throughout his Presidency Ford was plagued with unflattering caricatures. He often was labeled as an "irredeemable klutz," which turned into a recurring Saturday Night Live skit for comedian Chevy Chase. The skits included the President falling or tripping, stumbling over his words, and dropping or running into objects. Being likened to Bozo the Clown was "probably the roughest caricature" Ford had to face. The jokes by late-night comedians were harmful, yet, Ford was able to rise above insults. He "was secure enough in himself to laugh at the caricatures." Politicians and colleagues in Washington, along with those who knew Gerald Ford personally, knew of his value as a strong leader of the nation, regardless of his portrayal by the media.

The "Rock Jerry" sculpture has proved popular at the Gerald R. Ford Museum and has been featured in other exhibits as well. It traveled with the "To the President: Folk Portraits by the People" exhibit, which features 56 pieces of art created by citizens. Caricatures of Bill Clinton, John F. Kennedy, and Richard Nixon were also featured in the exhibit.

"Rock Jerry" serves as a reminder of the caricatures created throughout Gerald R. Ford’s presidency. Its likeness portrays Ford as a happy figure, comfortable with himself, the way so many remember him.