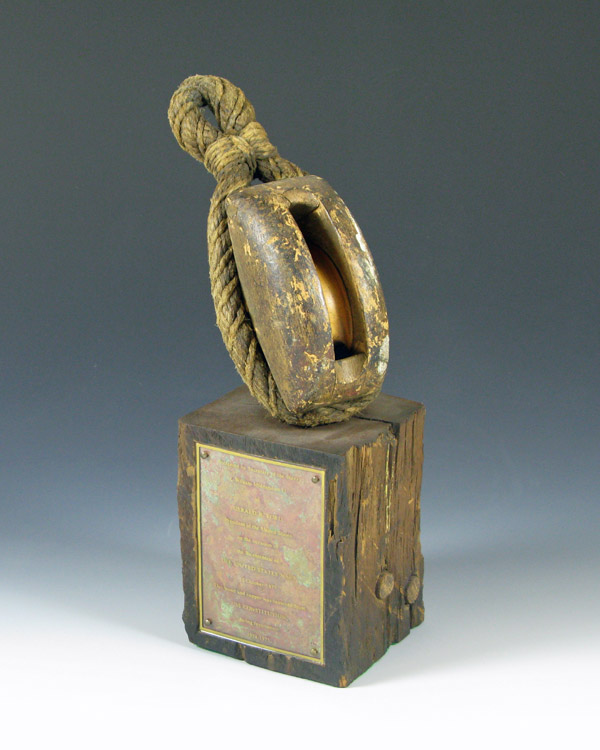 Nail to the mast her holy flag,
Set every threadbare sail,
And give her to the god of storms,
The lightning and the gale!

On October 13, 1975 president Gerald R. Ford was presented with a plaque made from pieces of the naval warship the USS Constitution in celebration of the Bicentennial of the United States Navy. The plaque consists of a block of wood, an oval pulley, and a few copper pieces that were taken directly from the ship during her restoration in 1974. The copper pieces are found on either side of the block of wood and are protected by Plexiglas while the pulley rests atop the block. This plaque represents an important part of naval history and honors the most revered ship in the United States Navy and the oldest commissioned warship in the world.

The USS Constitution was one of six ships that founded the United States naval fleet. She is nearly as old as the historic document whose name she bears, each proving itself to be a resilient symbol of America’s strength, courage and liberty. The construction of the ships was authorized by President George Washington, who signed an act to provide naval armament to protect the large American merchant fleet from increasing attacks by the North African “Barbary Pirate” states of Morocco, Algiers, Tunis and Tripoli as well as protect the merchant fleet from aggressive attacks by the British. All six of the frigates were designed by Mr. Joshua Humphreys, a Philadelphia Quaker and a naval architect. The USS Constitution was built in Edmund Hartt’s Shipyard in Boston, Massachusetts and was designed to out sail larger opponents and defend and outfight any other ship of the same size. She was made from 2,000 trees, and her canons were cast in Rhode Island. The famous crier Paul Revere provided her copper sheathing. On October 21, 1797, the Constitution was successfully launched, two earlier attempts having failed after her hull fouled on the launch rails. By July 1798, she was at sea under the command of Captain Samuel Nicholson.

The Constitution took part in several battles and had two peace treaties drafted and signed aboard her, both of which were between the United States and the Barbary states of Tripoli and Tunis. Yet the ship’s most memorable event occurred during the War of 1812, while battling the HMS Guerriere. On August 19 of that year, after an hour of maneuvering and trading cannon shots, the two ships moved in close enough to start a short range firing battle. During this battle, someone on the USS Constitution reportedly saw a British shot bounce off Constitution’s side and shouted “Huzza! Her sides are made of iron!”, and thus she earned her affectionate name “Old Ironsides.” The USS Constitution, to this day, is still listed on the role of active ships of the U.S. naval fleet and will always be seen as a national symbol.