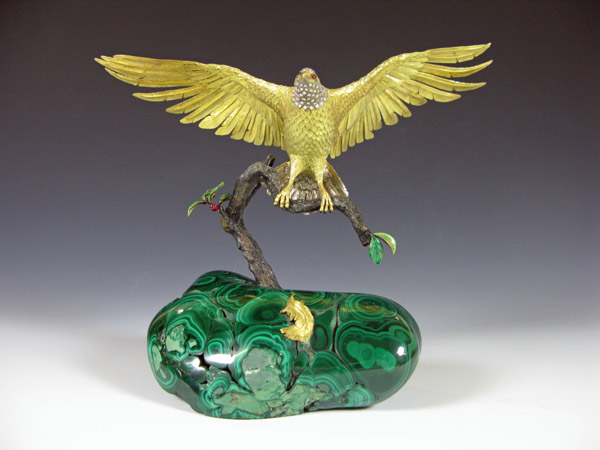 This exquisite bird made of gold, diamonds, rubies, and silver, was given to President Gerald Ford when the Sultan of Oman, Qaboos Bin, visited the United States on January 13, 1975. Since the early 8th and 9th century, Falcons have played a major role in the Middle East. They stand as a symbol of rank and social standing. They were often used by lower classes to attain their food.

In Oman at the time of Ford’s presidency, the people were poor and falconry was still in avid use, especially by the country’s royalty. This sculpture represented the Sultan’s respect and admiration for the United States and his hope for a continued friendship between the Gulf sultanate and the leader of the Free World.

Oil, critical to every part of American life and an abundant Middle East resource, had just been discovered in Oman. And since Oman was not a member of the Organization of Petroleum Exporting Countries (OPEC), whose Arab-member nations had embargoed oil shipments to the United States and Western Europe in 1973, President Ford was particularly interested in forming a trade agreement with this emerging petroleum exporter.