Martin Jablonski and the SS Mayaguez 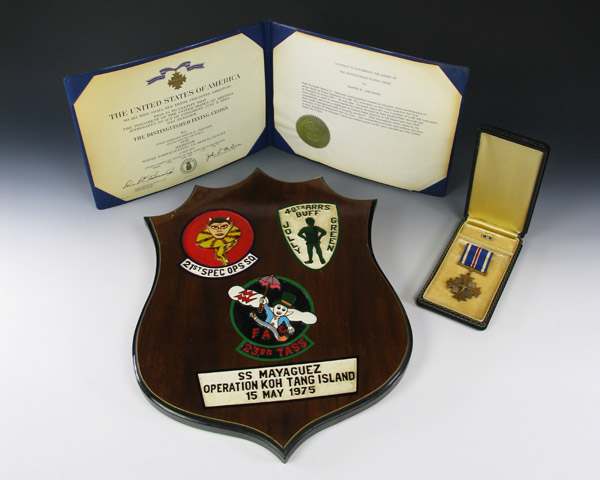 The international drama known as the “Mayaguez Incident” tested the resolve of our nation and our military in trying times. Drawn into the fray were two men who hailed from Grand Rapids. One took the reins and made the tough decisions from the highest office in the land, while the other entered harm’s way to implement the military response. Afterwards, both drew honors for their leadership and heroism.

Khmer Rouge forces from Cambodia seized the American container ship SS Mayaguez and its crew in the Gulf of Siam on May 12, 1975. American reconnaissance planes quickly located the ship and followed its movements to the island of Koh Tang. Several U.S. Navy ships made sail for the gulf. Squadrons of HH-53 Jolly Green and CH-53 Knife helicopters readied themselves in Thailand to transport marines to rescue the ship and its crew. The swift military mobilization resulted from the White House response.

Grand Rapids native President Gerald R. Ford saw the need to act decisively at a time when potential hostile nations perceived a weakness in American military prowess - stemming from the hasty evacuation of American forces from Vietnam and Cambodia the previous month. Administration and Pentagon officials sought to avoid another USS Pueblo incident and recognized that swift military action would prevent rogue nations from bullying America.

The military response included a Marine assault on the island of Koh Tang. The attack involved thousands of military personnel - from the top brass at the Pentagon to enlisted men in the field – connected through sophisticated communication networks. Among the few who participated in the actual operation against the well-entrenched Khmer Rouge forces on the island was Grand Rapids native Staff Sergeant Martin Jablonski, serving as flight mechanic on one of the Jolly Greens used to transport the marines.

Jablonski’s helicopter, Jolly Green 42, flew marines in on the second wave of the assault on May 15. The helicopters encountered fierce resistance from the entrenched enemy. Several choppers went down and marines fought desperately to maintain a beachhead. Jablonski later recalled, “on the island, mortar shells had exploded all around the aircraft and shrapnel had severed an electrical wire bundle located two feet from where I was positioned… I had been lucky.” During the intense firefight, Jolly 42’s auxiliary fuel tanks were ruptured, but they did not explode. The pilot and the crew of the helicopter kept her flying after successfully delivering the contingent of Marines to the island. They then made it safely to Thailand despite the damage. Overall, the fourteen-hours of combat netted the ship and its entire crew. The heavy casualties suffered by the small strike force added a few final scars to the legacy of Vietnam.

President Ford was praised for taking the decisive action needed to end the crisis. He extended his admiration to those who took part in the rescue through a live broadcast to the nation: "I wish to express my deep appreciation and that of the entire Nation to the units and the men who participated in these operations for their valor and for their sacrifice." The United States Air Force awarded Martin Jablonski the Distinguished Flying Cross for "courageous action aided in the recovery of the SS Mayaguez and its crew."

Martin Jablonski passed away on Easter Sunday, April 8, 2007, after a protracted illness. His siblings, Pamela and Tim Jablonski, donated his citation, medal, and unit plaque to the Gerald R. Ford Presidential Museum in his memory and for all those who serve.