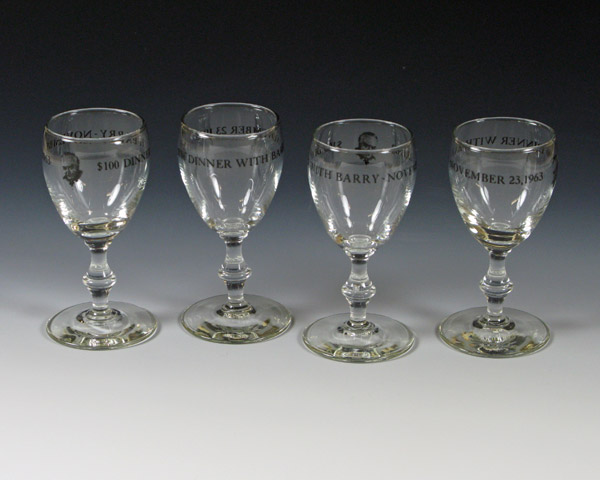 These glasses were used at a fundraiser for the 1963 campaign of Republican Presidential candidate Barry Goldwater. The $100 per-plate-dinner gave attendees a chance to mingle with many of Michigan’s elite, including Governor George Romney and Congressman Gerald R. Ford. The gathering was held in Ford’s home town, Grand Rapids, on November 24, 1963 at 7:30 p.m.

Clearly printed on the glasses, however, is the date November 23, 1963. Plans throughout America for that day were shattered by events that happened a day earlier. While visiting Dallas, Texas on November 22, President John F. Kennedy was assassinated. Lee Harvey Oswald later was arrested for the murder of the President. Two days after his arrest Oswald himself was murdered by Jack Ruby.

In response to the assassination of Kennedy, newly confirmed President Lyndon Johnson created the President’s Commission on the Assassination of President Kennedy, to assess all of the information surrounding the event. Congressman Gerald R. Ford was chosen to be one of its seven members. Chaired by Supreme Court Chief Justice Earl Warren (whose name was given to the unofficial title of the commission), other members included CIA Director Allen Dulles; former chairman of the board of Chase Manhattan Bank, John McCloy; Georgia Democratic Senator Richard Russell; Kentucky Republican Senator John Sherman Cooper; and Democratic Congressman Hale Boggs of Louisiana. The Commission concluded that Lee Harvey Oswald was the lone gunman and "found no evidence of conspiracy."

These clear stemware glasses serve as a reminder of the political times of the 1960s. Barry Goldwater was an outspoken candidate who hoped the West Michigan fundraiser would help the conservative Republican gain political clout within Michigan. The tragedy in Dallas, however, irrevocably changed the dynamics of the 1964 presidential contest, and the Warren Commission, because of its controversial findings, became a touchstone of the tumultuous 1960s. The 1964 election was a low water mark for the Republican Party, but it marked a turning point for Congressman Ford. Entrusted by a Democratic president with a sensitive seat on an important commission and viewed by his Republican colleagues as a trustworthy and hard working teammate, Ford would be named Minority Leader in 1965. He would hold that position until the House and Senate confirmed him as Vice President in 1973.