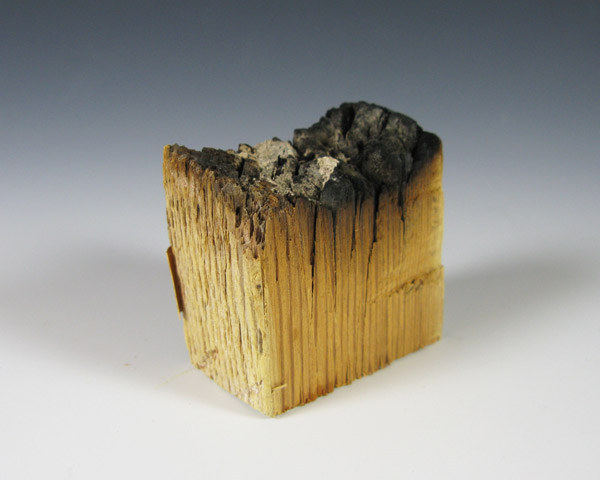 This small, charred piece of wood was removed from the White House during the renovation in the early 1950s. The piece was believed to have been burnt in the 1814 White House fire started by the British.

During the War of 1812, British troops, led by General Robert Ross, marched into Washington, D.C. without opposition, after winning the Battle of Bladensburg, Maryland. Hearing about the advancing army, most Washingtonians fled. President James Madison and his wife, Dolley, stayed until the last moment. On her way out of the White House, Dolley grabbed the famous Lansdowne portrait of George Washington, saving it from certain destruction by the British.

On August 24, 1814, the British troops arrived at and feasted in the empty White House before torching the Executive Mansion along with a good part of Washington, D.C. The British left two days later. Upon returning to Washington, President Madison discovered the charred mess that was the Federal City, vowing to rebuild and doing just that.

From 1949 to 1952, the White House underwent a major renovation. President Harry Truman noticed when he moved in that the White House was quite dilapidated, and pressed Congress for funds to refurbish the mansion. In the House of Representatives, the White House renovation was overseen by the Public Works Committee, on which sat first-term Congressman Gerald Ford. Truman gave Ford and other committee members a personal tour of the White House, pointing out its defects. What Ford remembered most, however, "…was when he took us into the Oval Office and I saw that little sign on his desk: 'The Buck Stops Here.' I thought, Well, that’s a good description of a President’s job."

The three-year project included tearing down all but the exterior walls and rebuilding everything within. In the process, workers found charred lumber from the burning of the White House in 1814. Clearly these structurally unstable pieces could not remain. Instead, they were removed and sold to the public as souvenirs, as directed by the Commission on the Renovation of the Executive Mansion.

In March of 1952, a small ceremony marked the end of the renovation and the opening of the refurbished and structurally-sound White House.