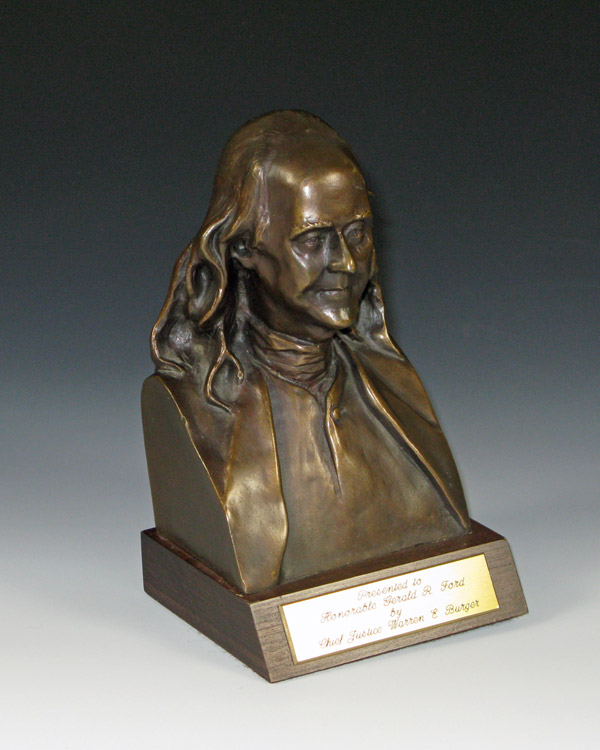 In 1923 a young Warren Burger sculpted a bronze bust of Benjamin Franklin. In 1969 Burger become Chief Justice of the United States Supreme Court, and his bust of Franklin came to the attention of the Franklin Mint. The Mint, headquartered in Franklin's adopted home town of Philadelphia, cast twenty bronze and three silver copies of Burger's work in 1987, entrusting them to the artist to give as gifts to whomever he wished.

The Chief Justice gave one bronze replica to Gerald Ford sometime in his post-presidential years. Indeed, it was Burger who had administered the presidential oath to Ford in 1974. Ford had found Burger's conduct on the bench impressive, and when a seat of the Supreme Court had to be filled, Ford kept Burger's judicial views in mind. "Under Chief Justice (Earl) Warren, the Court had begun legislation by judicial decree instead of interpreting the law. Chief Justice Warren Burger had tried to limit federal jurisdiction and let state courts make more final judgments themselves. I thought his course was correct, and I sought someone who would agree with that view." Ford wanted to nominate someone who would work well with his Chief Justice.

The wooden base which the bust is affixed features a plaque inscribed with, "Presented to Honorable Gerald R. Ford by Chief Justice Warren E. Burger".